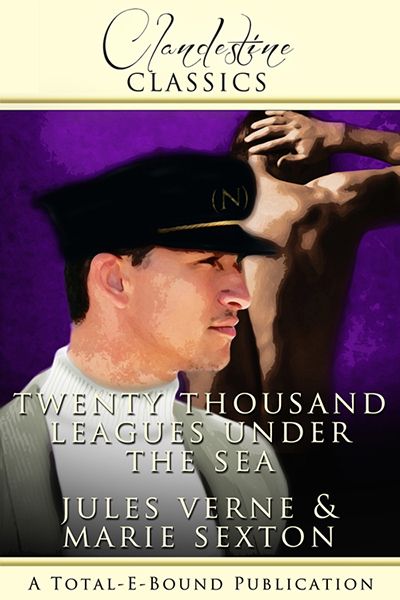 Twenty Thousand Leagues Under the Sea

The hunt soon becomes tedious, and Pierre is distracted by Ned Land, a sexy and temperamental harpooner who has his sites set on the Professor. The two begin a passionate affair, but an encounter with the creature they seek changes everything.

Professor Aronnax, Ned Land, and their friend Conseil find themselves held hostage aboard The Nautilus, a secret submarine helmed by the mysterious Captain Nemo. For Pierre, life on The Nautilus is ideal. He spends his days studying the sea’s wonders, and his nights with Ned, discovering a passion he’s never known. But how long can it last? Captain Nemo is reckless, and Ned is determined to escape. Caught between two charismatic men and the opportunity of a lifetime, Pierre will have to choose: leave The Nautilus, or lose the man he loves forever?

First, the title. The French title of this novel is Vingt Mille Lieues Sous les Mers. This is accurately translated as Twenty Thousand Leagues Under the Seas (plural). Verne’s novel features a tour of the major oceans, and the term ‘leagues’ in the title is used as a measure of distance rather than depth.

Second, Nemo’s name. It is interesting to note that ‘nemo’ is Latin for ‘no one’ and can also be translated in Greek as ‘I give what is due’. Both are quite appropriate.

Lastly, our original intent was to keep all of Verne’s original text, but the fact is, Jules Verne was one long-winded dude. Therefore, some extended monologues or lists of plant and/or animal species have been deleted from the story.